This is the mail that some of you have already received from Shin Tanaka, he has used all my contacts to send the same mail to all !!! I'm realy sorry, I make my apologies to all

Comment by Harold on November 7, 2008 at 12:07am
For who ever you are Johnny.. i know that you're not Shin... hahaha... okay phil? i wanna ask you something? who put the title Shin Vs Phil in the first place? I receive the same message that Johnny get, and from my understanding... there is no such thing as, Shin Vs Phil or what so ever?

look, the title Shin vs Phil is a craps!!... there is no such thing as Battling in this little scene... if every body wanna fight? fight with your self, push yourself to be better than any other living artist in this world... come up with something that represent you and be proud with it!!

Look people!! i don't want to be harsh or what!! but i've seen enough of this allready!! do something.. settle this down.. can we lock this topic allready?

Comment by ben the illustrator on November 6, 2008 at 9:24am
Put a stop to this, this is rubbish. Why has this come down to people taking sides? Rubbish, this isn't some kids trying to battle, this isn't a time to set up anything requiring the letter 'V', this isn't a court case, or a brawl, this isn't the Olympics or a dance off.

Shin Tanaka is a really great designer, a true artist, Shin understands design and art more than most. Shin has been at the top of this papertoy world for a long time, around 3 or 4 years ago Shin inspired me to craft more with paper, to take my own characters and do my own thing, separate to my illustration or painting. Don't knock Shin for not being 'socially-active', he's a designer, not a myspace socialite, he's busy creating amazing things, he's been reknowned for it for long time and gets credit and respect from people outside the boundaries of our paper toy community. Shin was one of the first to do this kind of papertoy thing, put them out on the net for people to get for free. No-one has a reason to knock what he does, most people can only dream of creating as well as Shin does.

Every creative area has the problem of some artists taking inspiration, styles, techniques, characters etc etc from other artists, it happens. Whether it's stolen or just an influence. Stop arguing over it and pay some respect to the people who break boundaries, the true designers who do things first, the artists who will be remembered in the future.

Comment by PHIL on November 6, 2008 at 4:30am
Thank you all for having understood! I hope!
but I do not understand the problems raised by JOHNNY.

You can not judge me because I wrote the instructions taken from those SHIN!
This does not mean to copy his style! and the template of the shoes is totally different from his. I spent 5 days to create and refine. urge you to look at the template shoes of the G-BOY and compare it with the last toy I'm producing and you'll notice that there was a search. This shows that I have personally worked to define my style!

Anyway thank you for the comment, if anyone is interested in these things not ever grow artistically

I love SHIN and Phil's work.
In this case, I believe SHIN.
He wouldn't be angry if this is the first trouble....but this is al least 3rd as far as I know....
Because I have been watching paper toy culture since 2004, I know Phil often do insult to shin.

First, he used SHIN's sneaker template on his template.
I thought they are so similar shape, and tried to lap the two template.
The outline is almost same. No one can believe PHIL didn't stealed SHIN's template.

And 2nd is on website.
Phil used some sentences from SHIN's web sentence.
I have the images. Do you think this is a miracle?

Then 3rd is this case.


If I were SHIN, I won't let an insult like that.
But SHIN is very smart, don't you read his reply?
He worried about Phil, I think he want to protect him from unkind fans,
and he want Phil not to forget his originality and identity. 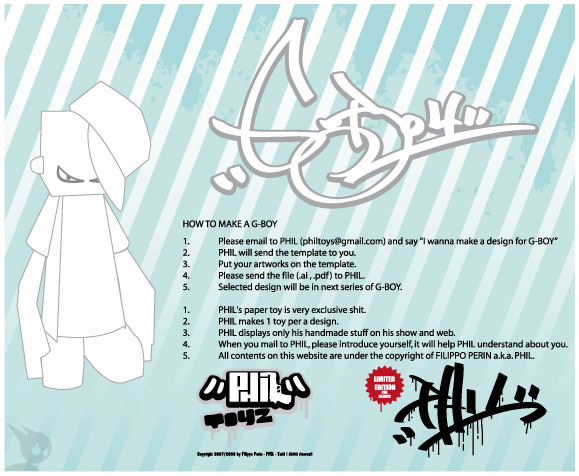 Comment by CAF3N CANC3R on November 6, 2008 at 2:17am
i gez mr phil will do d same thing f he saw someone rip off his design.well thts how big dog play.man!! this is life,its natural for someone who have name 2 do such things!dunt be gulty if u ain't done anything wrong.peace!!

Comment by Harold on November 6, 2008 at 1:57am
they are not competing against each other... this is what we call as? clash of idea.. two people have the same idea at the same time? come on people... both artists inspire us to improve and to be creative, i hate to this things like this happened...

Like Tephlon said? we dont have enough space to fight?...

Paper for peace and no war

Comment by Eric Wirjanata on November 5, 2008 at 8:52pm
you should do something Phil.

I love Shin's and i love yours.
and yeah they're looks alike.
but i was thought that kind of typography are common in the hiphop scene.

This branch of art doesn't have enough space for a fight.

Yes, you guys have a similar style, and I guess that Shin got a bit agitated when he thought he got ripped off. Like I said before, him e-mailing everyone on your mailing list wasn't exactly cool, especially when you consider that some of the people that got his mail might have been sponsors of yoour show etc.

If Shin reads this: Please work this out with Phil. It's not worth fighting over.