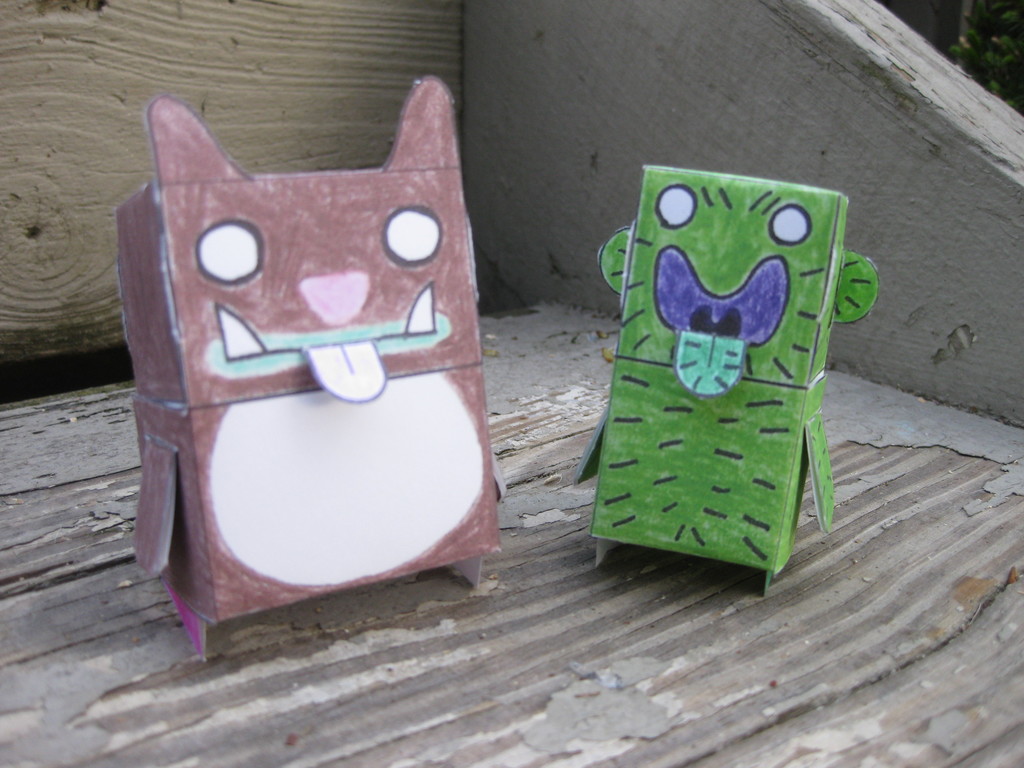 You know Ive been constantly saying how much Ive been wanting to make papertoys but they end up terrible so over the past I decided that I will not be a papertoy artist but just an artist and even end up making munny customs and vinyl toys such one day hopefully...

I decided to be a regular artist instead of a papertoy artist but that dosent mean I cant make a custom toy every now and then I have already customized a BoxCan papertoy by PHIL but now Ive decided to make a boxpunx series all customized to look like characters that I draw and the design on them is hand drawn. I got the idea thanks to Harlancore for creating boxpunx analog abominations so I printed out blank boxpunx and started drwaing on them. Unfortunatly it failed.... :(

Many months later I decided to give the boxpunx series another try and this time success!!! >:)

I have many plans to make many morecustom boxpunx and even other other toys later that I have plans for such as: Foldskool Hero, Anywhere, and Sizza...

I have also now created a blog taht will post the customed boxpunx and their templates everytime I make them. No there will not be any specific dates I will release them I will release them anytime I feel like. This boxpunk series will go on basically forever because I will kept drawing and thinking of more and more characters in my life so this will be basically the series that never ends...

The reason I decided to make them all hand drawn and not with something fancy like computers is because I honestly feel hand drawn is much better because you put alot of heart into it when doing it.. that and Im just really good at drawing by hand.

the boxpunx available so far are

Comment by damien.t.howell on April 19, 2010 at 2:00pm
nice designs; certainly like that they're hand drawn. i've been contemplating my next papertoy project & may just have to follow you along this route. thanks for the inspiration. ...and, if i might throw in my two bits for the day : don't fret labels. do what makes you happy & the rest will follow.

Comment by Morgan Gleave on April 19, 2010 at 5:28am
Good on ya, Gabriel! Loving the hand drawn approach... I've bigged up your launch on my blog too: http://theanywerechronicles.blogspot.com

Keep up the good work!

Comment by Abz on April 18, 2010 at 7:41pm
Nice! I love these characters. You're a great artist, Gabriel! I really like that you've hand drawn these, it gives them that added bit of personality. Funny enough, I finally had a chance to download the entire Analog Abominations series yesterday and have already built 6 of them. This is probably my favorite series of Jason's. It's great that you've drawn inspiration from it and have created these characters to share with us. I've already downloaded them and will make them tonight. :) Great job! Keep it up!