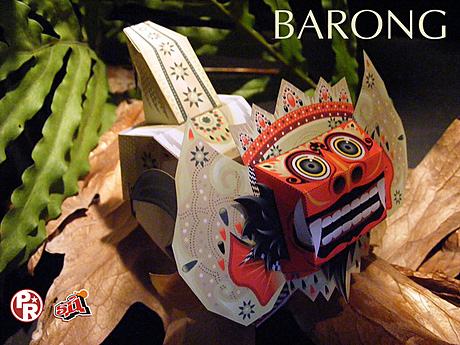 Barong is a character in the mythology of Bali. He is the king of the spirits, leader of the hosts of good, and enemy of Rangda in the mythological traditions of Bali. Banas Pati Rajah is the fourth "brother" or spirit child that accompanies a child throughout life. Banas Pati Rajah is the spirit which animates Barong. A protector spirit, he is often represented by a lion, and traditional performances of his struggles against Rangda are popular parts of Balinese culture. 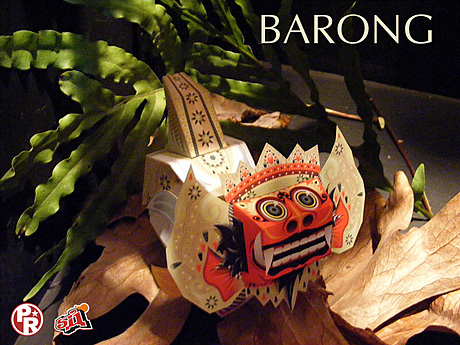 The lion barong is one of five traditional Barong. In Bali each region of the island has its own protective spirit for its forests and lands. Each Barong for each region is modeled after a different animal. There is a boar, a tiger, a dragon (or serpent) and the traditional lion. The lion is the popular one as it comes from the Gianyar region where Ubud (the home of tourist viewed ritual) is located. Within the calonarong, the dance drama in which the Barong appears, the barong responds to Rangda's use of magic to control and kill her to restore balance.

grab the pdf at http://paper-replika.com/index.php/Myth-and-Culture/Barong-Papercra... and don't forget also visit another section for more awesome papercrafts

once again... Thank you all.... very very much for all of your supports :) Cheers!

Comment by mckibillo on July 14, 2009 at 7:24pm
awesome.. and I really think you have the beginnings of a book project with these mythological characters.

Comment by Scott Schaller on July 14, 2009 at 9:28am
Amazing (as always) and your artwork is fantastic. I love how you are combining papercraft with your cultural heritage and teaching all of us around the world about it. Wouldn't it be cool if you wrote a book about Indonesian spirits and included papertoys for each story, and a stage so children can create settings and maybe do puppet shows about the story. Make it more interactive? I would love to have a book like that.