Hey guys! Just a quick note that I'm still around, just had a lot of stuff going on and had not much time to work further on my papercraft. I just recently produced a high-quality print (xerox 4c laser) for the eTUI design i posted a while back and will post a few pics once i cut it. I won't have that much more time over the next two months, but I'll try to work more on the eTUI and get a few templates ready for release. 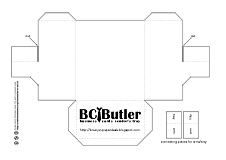 I added the blank BC Butler template to my blog and in addition had an idea about extra 3D hands for that model. http://brainjar-paperdesk.blogspot.com/

I just released my first papertoy called BC Butler. It's a display for business cards. You can download the model from my blog. Feedback is of course welcome. I'll upload an empty template for customization tomorrow.