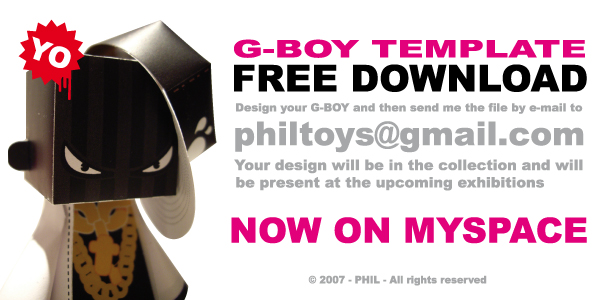 Design your G-Boy and then send me the file by e-mail to : philtoys@gmail.com

Your design will be in the collection and will be present at the upcoming exhibitions!!!

i havn't been very active on NPT.com lately or even my own blog but now im gettin back into the swing of things as i have alot less h-work than i did before. :P

anyways, the reason for this post is that my blog has been updated which can be found at www.anubistomb.blgospot.com and if anyone is interested in creating a custom paper toys than email me about my "Shelfbuddy" project and ill give you a template so you can customize it and send it right on back to me… Continue

Indiana Jones and the Fertility idol from "Raiders of the Lost Ark" are now available on my site. 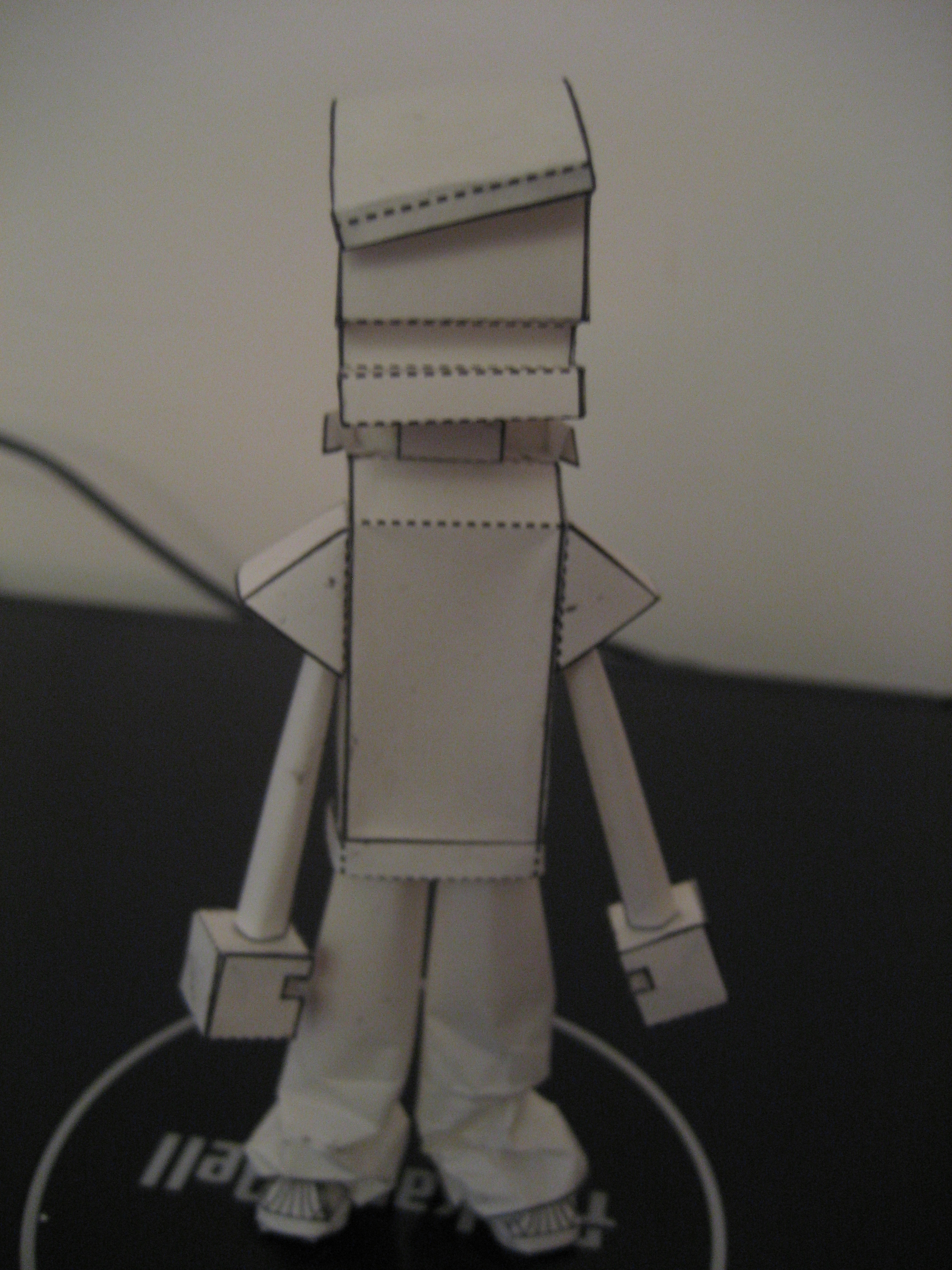 ask me by email the blank template of funky joe at jaiklann_dhoe@hotmail.fr and i'll give you back the template

By accident I discovered this papertoy... I call it "drukk". 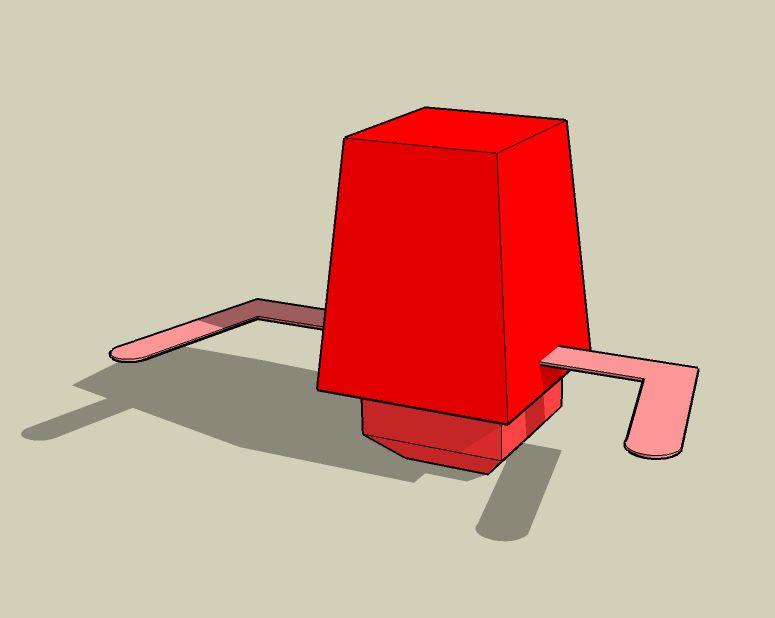 It's still work-in-progress so if you want to help me, just let me… Continue Sparky deviates from his usual matchstick form in this, his 4th edition. Inspired by classic car hood ornaments from vehicles of the 1920's and '30's, he leans forward, arms sprawled out behind his as wings. His artwork is based on chrome sculpture of the Art Deco school. The base that he stands on uses curves that… Continue

Well I've been super busy with a lot of stuff I hope to show you soon. Here's a quick list of all the new models available on my site since my last post:

Servbot from the Megaman Legends series:

The Zoo has just gotten a new member!

Nice Paper Toys own Urbanfresh came up with this one,
I really like the idea, and again a form I haven't thought of.. ;)

You can, as always, get him along the other SIZZAs on my blog!…

Hi everyone, sorry i havent been on here a while. I'm in my final year of uni and its all getting a bit hectic. Have more or less finished my new website which has my paper models on for display (downloads are coming soon, i just need to sort everything to the right format and uplaod it)

\Have also been working on a series of base paper toys called mushkins. I'm done a series… Continue Get equipped with... MEGAMAN!

http://www.play-roll.com/ has some interesting free paper toys. Some of them use toiletpaper rolls as their base. 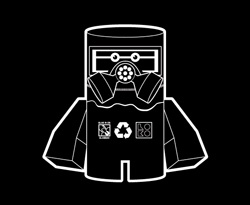 (By the way, for dutch speakers "Play-Roll" sounds like the popular word for toilet roll. ("Bog Roll" comes the closest, I guess?)

Edit: Via GIZMagazine, in their free PDF… Continue

A new concept I'm trying out... Your thoughts?

I'm trying out a new concept and style for a set of toys I'm working on - what do you all think? 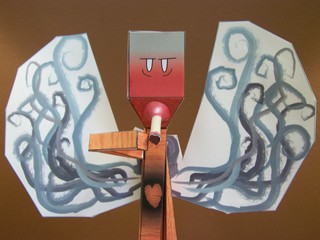 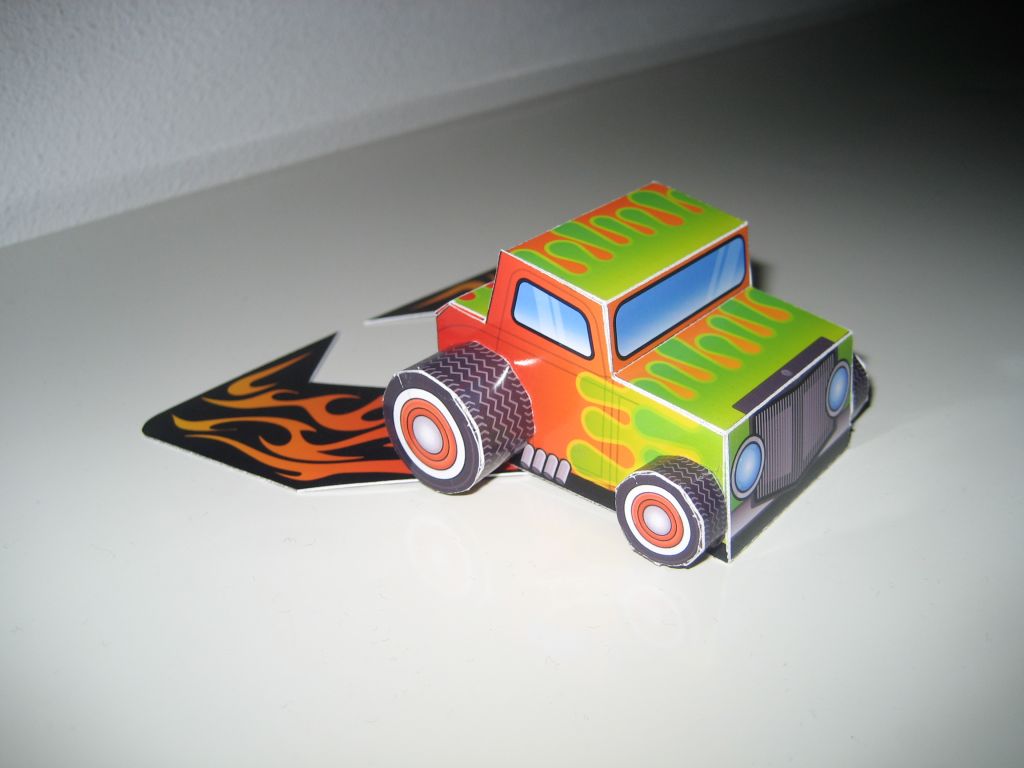 After finishing Grim Grinning Grunt, I decided to finish another custom.

Today I present: Grizza a SIZZA custom. SIZZA is created by Nick Knite, and Nick introduced me to Matt Hawkins!
And perhaps one of the reasons that I'm in the book...

I seem to have problem to keep the design in the models: I've modified SIZZA a… Continue

If you're into that sorta thing...

I have a deviantart page here.

As well as a myspace page here.

Have a nice weekend everyone!

And that is the end of the daily updates (for now).