paper and the art of photography 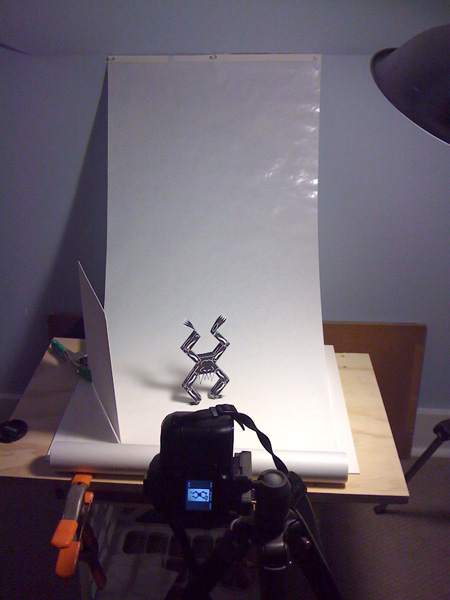 a few members have asked me about how i make the "catalog" images of my paper, so i thought i'd go over it here.

first off i use a nikon d50 DSLR. real basic, but it allows me to shoot in full manual mode which is critical for me to get the types of images i like. as soon as you yield control or decision making to a camera's computer, it starts making choices you might not agree with. especially exposure and depth of field.

depth of field [dof] is the amount of the image/subject matter that's in focus both in front of and behind the critical point of focus. you'll find that in a lot of my images the far ear, or very near hand is out of focus, or soft. that's a shallow dof. if you want every single detail of your paper in focus, you want a deep dof. f/4 is a shallow dof, f/16 is deep.

i also choose the slowest / lowest / ISO. ISO is the rating given to the speed of your "film" or in the digital world, the sensitivity of the chip that's capturing your image. the slower the ISO in the digital realm, the less "noise" and vice versa. noise is what the chip uses to approximate what it sees. used in low light conditions, noise allows the camera to capture quick moving subjects by "guessing" and then filling in. it's why in some very low-light photographs, you see solid green or magenta colored dots sprinkled throughout your image.

a low ISO requires longer shutter speeds and wider apertures. f/4 is wider than f/16. counter intuitive, but that's the way it is. in this case, the slower ISO contributes to the effect i'm going for by forcing me to use a wider aperture and therefore a shallower dof.

i don't have a ton of light available where i have my set-up. just one of those old aluminum, domed, work-bench types of light with a 100 watt bulb. combine this with the slow ISO that i use and you have the making for a very long shutter speed. i don't use a flash as i don't like how the pictures look, so i'm stuck with a shutter speed of 1/15th of a second. for a lot of things, that's very fast, but for quasi-critical photography, it's forever, and if you try and hand-hold it, unless you're a brain surgeon, there's a chance you'll get blurry and out of focus images. so i use a tri-pod and set the timer so that any hand movement pressing the shutter release doesn't shake the camera.

the light is coming at the subject almost from 45 degree to the right side for that nice shadow bleeding to the left of the frame. so i use a bounce card of white matte board to reflect some light back into the non-lit side of the subject. this way details don't get lost in shadow, but you aren't lighting your toy with equal amounts of light, creating a flat look.

because of the use of an incandescent light-bulb, i use that option in the light source settings of my camera. i don't white balance to neutral as i like a warmish hue to my pictures.

i also shoot at the highest jpeg file setting. you can always res down, going the opposite direction will ultimately degrade your images. the file i end up with [in camera] is usually 17 mb in size. more than enough to do what i want. using RAW would be overkill, unless it was going up on a billboard.

my set is some flat plywood placed on a milk crate. the milk crate is a foot or so from the wall. i then run some butcher's paper that i've tacked to the wall [approx a 1 1/2 foot higher than the plywood] in what's called a sweep. the sweep runs down from the wall and over the plywood. from the side it looks like a quarter pipe [for you skaters out there.] there's a sheet of white matte board under the sweep for a clean white surface. using a sweep like this gives the illusion of infinity behind the subject. there aren't any angles or lines that you can make out, which i feel are distracting to the overall image.

so now that i have a properly focused and exposed photograph of my newest toy, i then import it to photoshop. first thing i do when the image is in it's highest resolution and all the original data is still there, is adjust the layers. this gives me a sharper white, a richer black and gives a bit of punch to the midtones. the image has more bite. before - a bit on the grey murky side 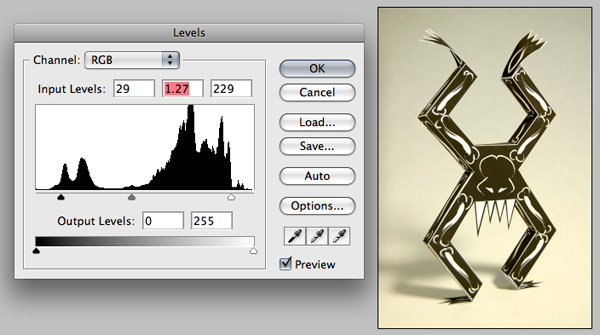 after - not a big difference, but i sleep better at night

on to resizing the image, which is at 300 dpi and 2200 pixels wide [or tall if it's a vertical] i go to image size, then uncheck the resample image box, set resolution to 72 and then re-check the resample image box. this allows you to set the proper dpi without changing file size. i then resize the actual dimensions to 600 pixels for the longest dimension side, keeping the constrain proportions box checked so the other, shorter dimension adjusts accordingly.

next save for web which gives me a great looking final image that's been optimized. the difference is usually 1/10 of file size. 700 kb vs. 70 kb. even with the increasing speeds of our internet connections, that's a big difference. i hope my images all load fast, they do for me. the save for web option has a bunch of settings. i use jpg and adjust the quality level with a side by side comparison to make sure i'm not going too far in the compression. it's a fine balance between great images and optimal size.

all that's left now is to upload the image to NPT, name it, say something about it, add tag[s] and place into my album.

i realize this is probably way too much info, but you asked and i geek out on photography. i hope this answers all your questions, but if not, fire away, i'll be happy to share all i know.

hahahahaha i'm doing this to man. :)

Comment by Abz on March 6, 2011 at 1:01pm
Great tutorial, Beau! Thanks for taking the time to make this post. You don't know how badly I needed this information. :) I think the next step for me is getting a decent camera.

Comment by The World of Imaginary Friends on March 2, 2011 at 1:35am
AWESOME! Great useful information. Much appreciated.