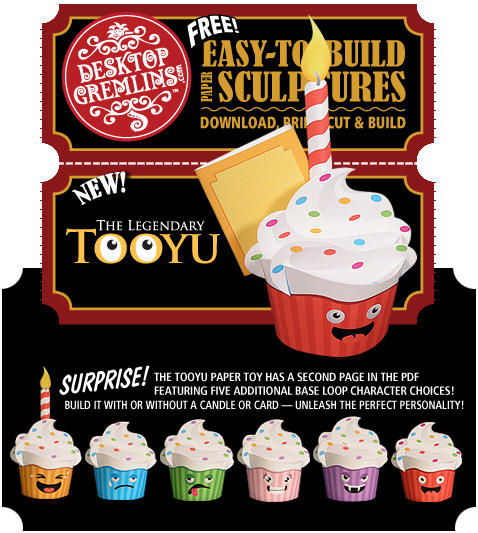 Centuries ago, when villagers celebrated a birthday, magicians learned a spell that transformed well-wishes and happy thoughts into a magical candle-carrying gremlin called a Tooyu. If captured, the Tooyu would grant a wish to whomever doused its flame. As years passed, Tooyu appearances became more rare, but people remembered the creature by baking a sweet cake treat to honor its power. It is hoped when you sing “Happy Birthday,” a Tooyu might make its return.

Tell me what you think and let me know WHICH ONE decided to appear on your desk! (And keep our a sharp eye for ways to unlock even more Tooyu!)

Comment by Southian64 on August 24, 2010 at 11:45am
Really, really cool! I loved the backstory that came with the Tooyu! My favorite toy would have to be the green one because i really liked his expression. Great Job Desktop Gremlins!